Three Wishes is an online slot title that was developed by BetSoft. This slot title is setup with 5 reels and 30 pay lines. Three Wishes’ pay lines can be activated by coins. These coins can be adjusted in value between 0.02 and 1.

The average Return To Player is 95.61%. Three Wishes is available for mobile play as well as desktop play. Players can make real money wagers in Three Wishes.

The Magic carpet symbol also acts as the in game wild symbol. The magic Carpet symbol substitutes for any symbol required to complete a winning combination.

The symbol will also result in a winning pay out if you land three or more of the icons on an active pay line. Three wilds are worth 200 coins, four wilds are worth 1000 coins and 5 wild symbols are worth 5000 coins.

The Three Wishes Magic Carpet bonus feature triggers when you land the magic carpet anywhere on the first reel.

When you do, the carpet will fly across the reel it landed on and turn the symbols into bonus credits for players to wager with. This feature will not trigger during the Three Wishes free spins feature. 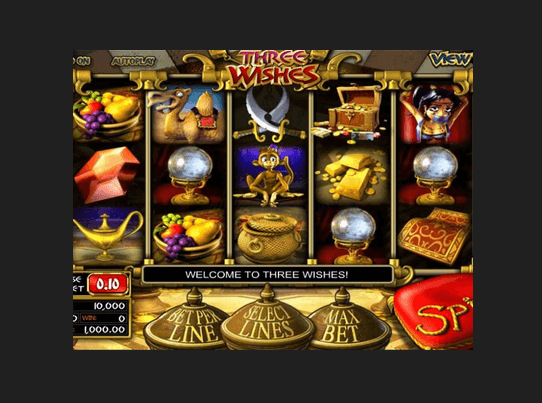 The Treasure Chest symbol in Three Wishes activates free spins. The treasure symbols act like scatter symbols and can activate the bonus feature by landing anywhere on the reels. The amount of symbols landing on the reels determines how many free spins players get.

The Click me feature in Three Wishes is triggered by landing the monkey icon in position 2 on reel 3. Players will be presented with a Monkey surrounded by icons.

Players must now click on the icons to reveal prizes. If one of your chosen icons reveals a collect icon, the bonus feature will end and the winnings are paid out.

The unique Three Wishes bonus feature is triggered by landing three lamp symbols on an active pay line. Once this bonus feature activates, players will be taken to a new screen where they must click on the genie’s lamp to release it.

When the genie appears he will grant you one of six wishes. You may choose between Wealth, Fame, Everlasting Love, Travel, Wisdom or a Long Life. Players can choose up to three wishes.